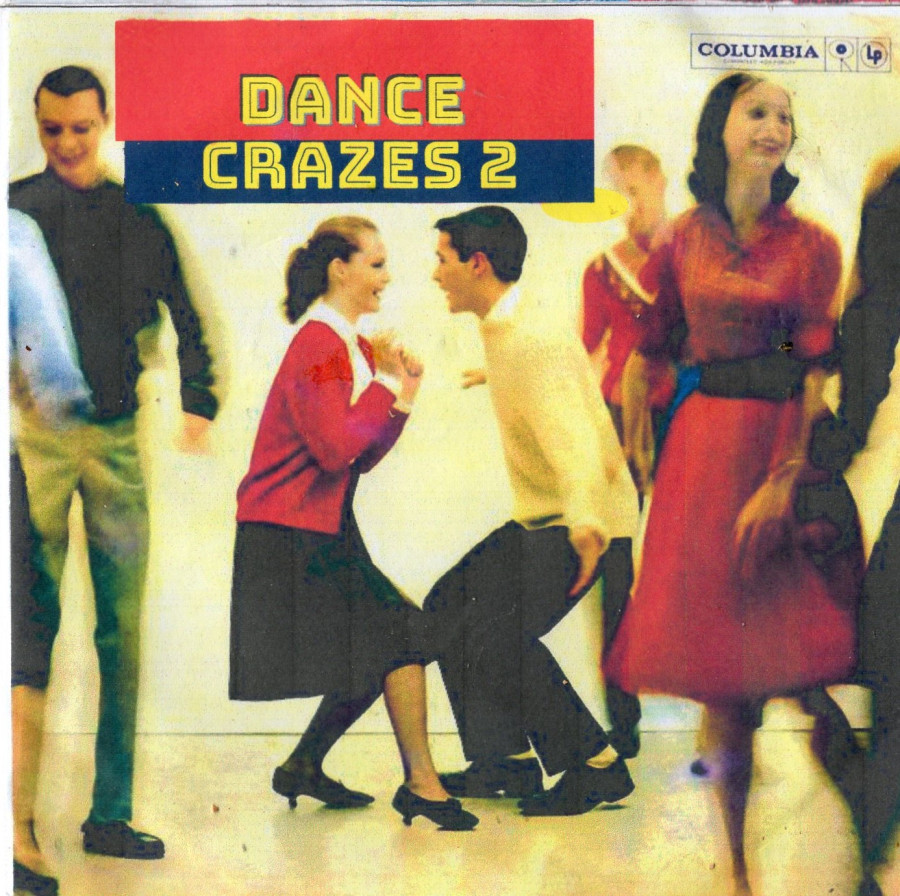 I told you you should have handcuffed me and put me in a straight jacket, but now it’s too late: I used the list of 600+ dance crazes (as published in the booklet of Vol.1), and here we are with 93 excellent tunes more, mostly uncompiled ditties (except 12 tracks from my own archive you might be familiar with but sure will love to hear once again). Just like Vol. 1 , I focused on the lesser known versions done by lesser known artist (except stars of Dance Craze like Chubby Checker and the Kingsmen). What I learned to love about Dance Craze fad  is three things: First, it tags both as Garage and as Soul, being neither one nor the other genre; second it mixes black and white (artists), and third, it showcasts both male and female voices the same, which is quite a rare thing in music ain’t that so? And lastly it’s the rough sloppyness of the production (recalling Garage 45s in frat sound), always over the top but with a (maybe stupid) IDEA and played by combos that are sharp and tight.  At any rate, I hope each track I selected will make you jump up from your barstool, grab your partner and let me see you shake a tail feather Baby!
PS: I left out the Twist and the Hully Gully since there are special sets / series in my own collection (search this site). I also left out instro tracks.
PPS: Dance Crazes Vol. 3 is work in progress… 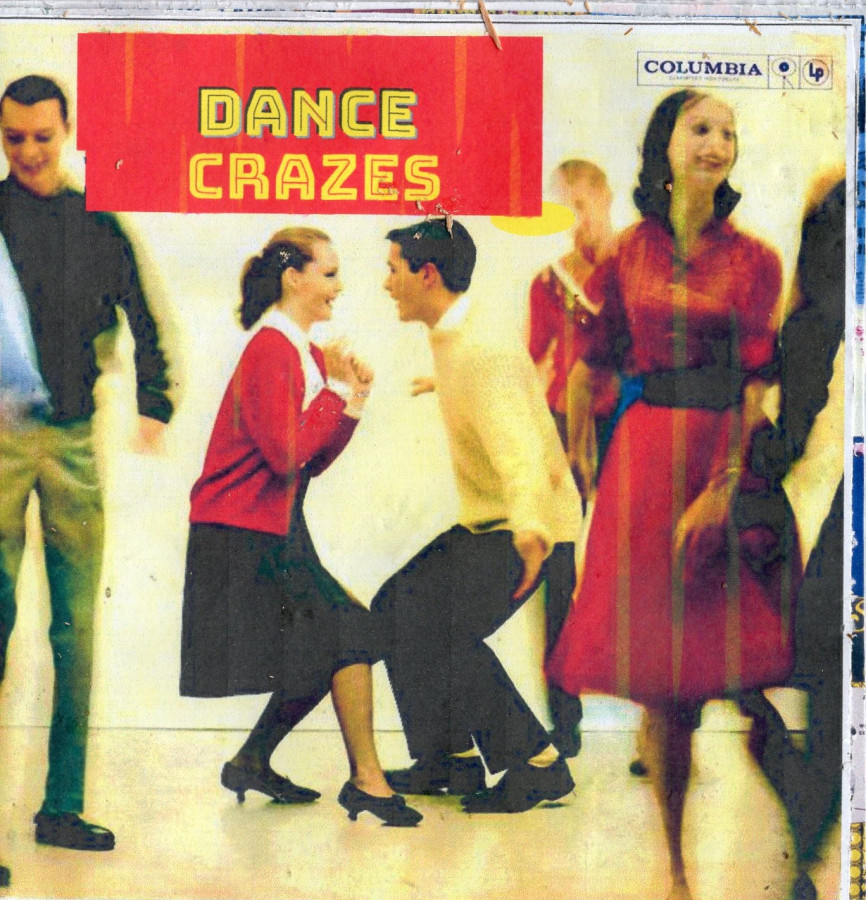 I guess the best thing to do is put your dancing shoes on, get yourself some cocktails (no beer allowed!), and go down with it! 84 specially chosen dance craze tunes are another excellent example of the innocence and fun in the (early) 60s. You just had to pick whatever happens, a car tire, a lamppost or a boomerang, and it’s gonna be a groovy "Do the Boomerang" tune. What more fun do you want from life? But, on the other hand it was a bitter serious affair, as everybody wanted to launch a world wide hit like Chubby Checker and Little Eva did, so no slouches here, and no fillers! Maybe we can add some handclapping and wild girly choruses. My set comes in alphabetic order of the Dances, I’ve thrown some better know blasters in but mostly concentrated on the little known Meisterstücks. In the booklet attached, I’ve printed out some of the dance instructions that often were shown on the back cover of the records and a list of more than 600 Dance Crazes of the 60s. So tie my hands, I’m tempted to digit those dance titles for a further search. But for now, I hope you’re ready to learn and listen to some gorgeous, wacky, genius dance craze rockers! Do the Kangaroo! (You’re lookin’ good!) 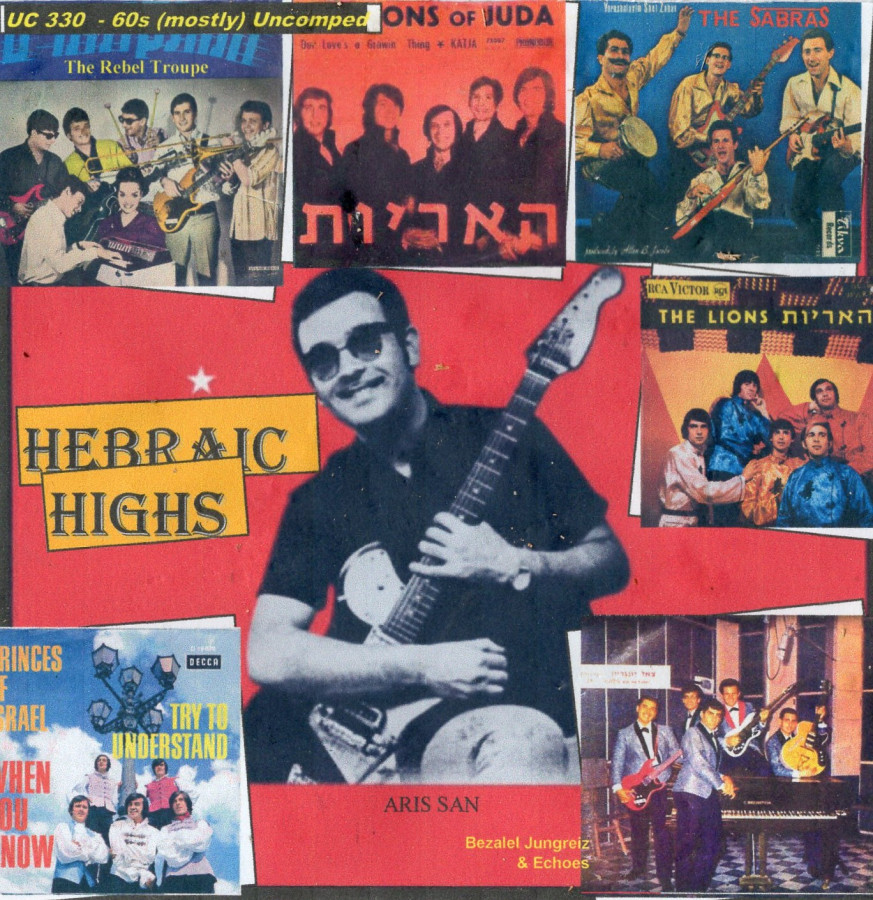 Who would have thought? As far as I’m aware, the only compilation on Israel in the 60s is the (quite boring) CD "Beat Music Festival" by the Hed-Aryi label, so this set takes a quite unique stand.
Beyond the Wailing Wall in the 60s, there were not many night clubs and recording studios for Pop music, nor was there a vast offer of modern (Western) instruments and amplifiers. Even though the import of Western Pop music elements had happened some years before, when Eastern folk first time was mixed with RnR. But first you had to electrify your Bouzouki and play concerts with one mike to sing and one more in front of the guitar. But there were a few courageous combos who delivered some fine tunes. Have in mind that at a time when Jimmy Hendrix stunned the Western world, in Israel they still dabbled with Woolly Bully. Our 6’30” introduction tune presents the star of this set (you see him on the cover) who came from Greece, settled in Israel, played concerts for Moshe Dayin and Ben Gurion, was suspected of being a spy, flew to NYC where he opened a night club soon frequented by Frank Sinatra and Anthony Quinn, got a cocaine habit so his club was raided by the FBI and he got a 2 year jail sentences, and in the bitter end finally died under “suspicious circumstances” in Romenia. (just to help you to get in the right mood, that is. Many Israeli groups and artists had to go abroad to cut a record (USA, UK, Austria, Germany, Greece ) (although the Sing Sings were Brit boys who tried their luck in Israel), and In the middle of my mix there’s various samples of the rare and uncomped recordings. Our Heraic set ends with a song by a troupe dressed up in military uniforms (seems they sing against he war, tho). You will hear. Huge thanks for most of the tracks go out to youtube channel yt דודי פטימר , and to dudipedia.wordpress.com info (in Hebrew!) and pics. Translations of song titles might be courtesy of Google Translator. Yé Yé and Falafel! 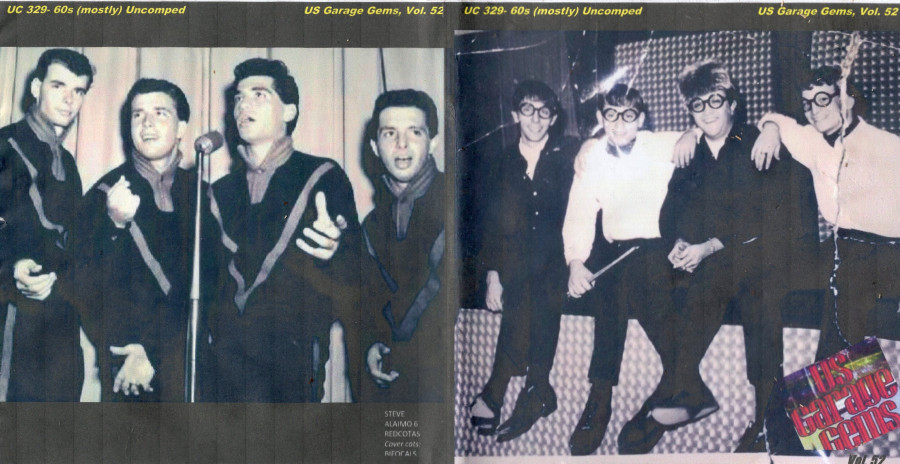 Back again with more US Garage gems after our last set that was posted not even 2 month ago. Which means, the river of uncompiled nuggets might be a creek now but is still running. Again, you’ll meet all unknown / forgotten / underrated bands and artists (except Steve Alaimo, and Bobby Comstock, RiP), and you’ll also hear a few unreleased acetates, and audio clips from TV shows. This set features 3 groups of the same moniker (Escorts, Continentals, Hi-Boys), thought they’re all different combos. As usual, we start in the pre-Beat era of the early 60s with some tunes I file under “Garage”, and we stop our expedition in 1968, so the all over sound is quite rough and a-kickin’, no lame tear teasers and folk ballads here. Finally we have to thank all you tubers listed in the booklet who generously decided to share their treasures, especially some 60s Beat aficionados as Jane DeNeefe, Scott Johnson, Justin C, downstate sounds, Linda Lee, and lexingtunes (Shawn Chambers of the lexingtunes site has written a good book on “The Vinyl Years of Central Kentucky"), For the rest, I’m still wondering if The Bifocals you see on the cover are all wearing the same black rimmed spectacles, or is it some window pane joke glasses. I’m afraid, we will never know…

some anonymous friend couldn't live without the girls, so I've re-uped the entire series. lnks at the "Girls with Beat" pages 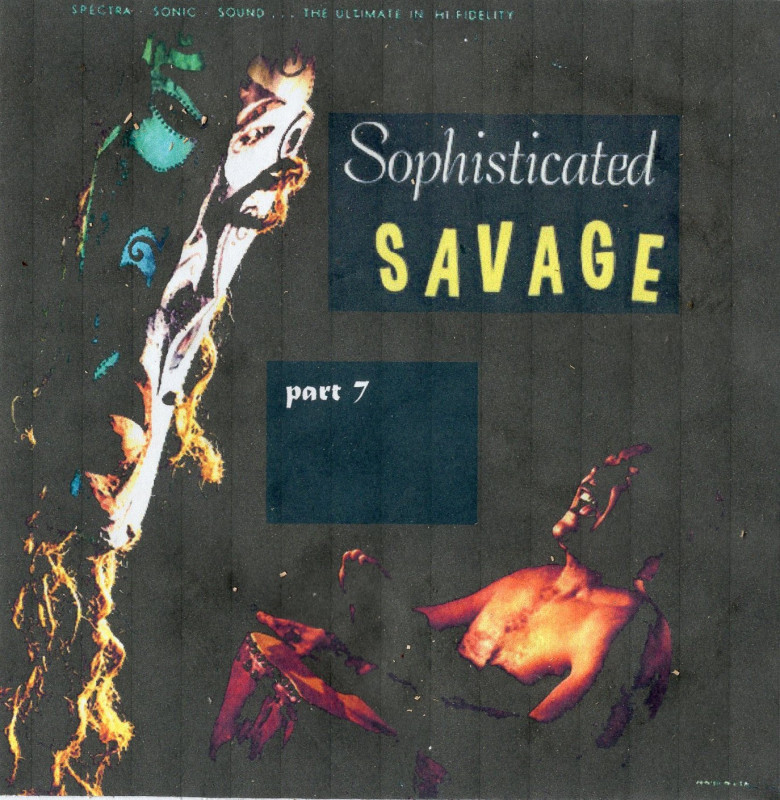 I hope you’ll enjoy some more sophisticated savage tunes from mostly forgotten or unknown artists, ranging from 1957 to 1968, all in alphabetical order, all in glorious frat sound, all kicking ass, and all with a special twist that takes its inspiration from various genres such as RnR, Soul, Doo Wop, even Gospel and C&W without ever been pure RnR, Soul, Doo Wop, Gospel and C&W. A glance at the tracklist will make you image what’s served: King Kong meets Cleopatra, and Humpty Dumpty meets Popeye. All soaked with fat brass, pumping organ, squeaky girly choruses, bashing drums, tight bass lines and some fuzz guitar. What more do you want from life?  Get down with it! Who had thought that no longer than 2 weeks after our last scraping tour, here we are back again with Teil 12, and it’s even a double pack! When I found Herbert Jentsch’s youtube channel I knew I had hit a gold mine! Big time! 52 uncomped, unheard and until now unappreciated little gems from the German (Swiss, Austrian, and GDR) underground, or, mostly, from the Beat stand of the Schlager market. In one month time, Herbert has posted about 2,000 tracks (!) and he told me it was his third attempt after youtube closed his channel twice. That’s what I call tenacious!  So prepare for the Polka, The Jenka and the Hokey Pokey and pat the back of  many more or less infamous Schlager stars you wouldn’t expectto board the beat train at least once in their career. Actually, I should have named this compilation “Scraping the Schlager Beat Beer Barrel” since that’s where the bulk of the tracks I collected come from. Stars of our set are Die Nordwinds (with my long time favorites "Arme kleine Sheila" and "Heisser Sand") and The Rebel Guys with 3 uncomped beauties.  I have translated some lines of the lyrics for all my non-German speaking friends, so they get an idea of what the songs are about.

Thanks go out to Uwe Dietrich and Dieter Driese who run the fabulous fb forum “Sie nannten es Deutscher Beat” and to Herbert Jentsch, who all must be a leading connoisseur of the German Beat scene, and I’m sure the diggin’ will go on down…. 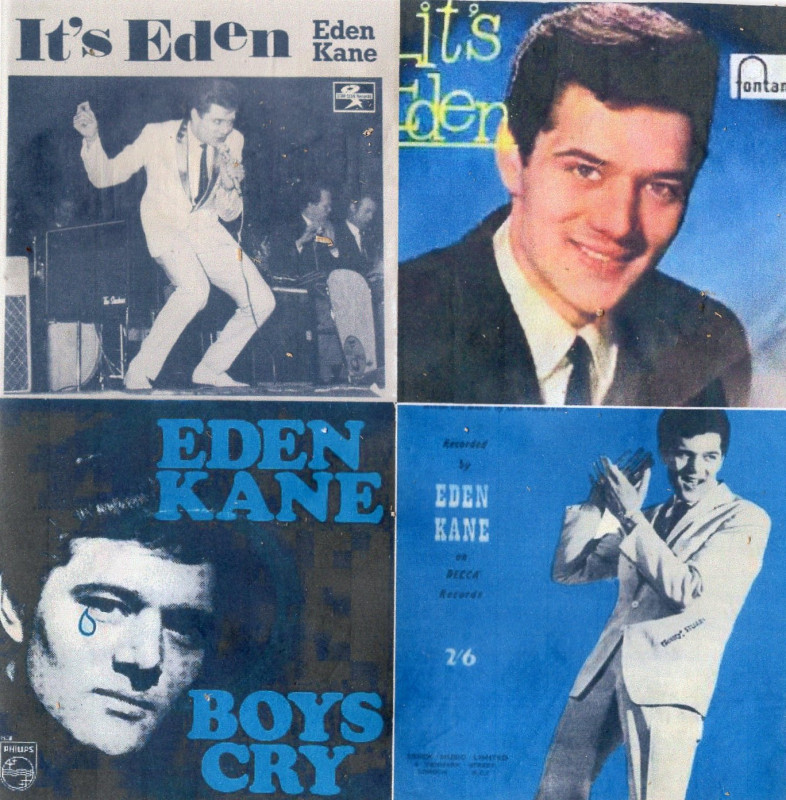 This is an exception to my site’s concept as all tracks come from the same artist, Eden Kaine (and the Downbeats). I was stunned this man, although a large outing, is most underrated and doesn’t even have a decent anthology. So I decided to step in. I guarantee it’s all first rate pre beat and beat tunes that never have been comped before (except “My little Sue” on "John, Paul, George; Dave. Brian, Tony & More”). Image a teenage pop singer inspired by Cliff Richard and Tommy Roe but with much more personality than his colleges, say Billy Fury or Adam Faith. Although he enjoyed a few minor hits and charted n#8 with the marvelous "Boys Cry”, his third single, he seems to be forgotten now. I’m sure you’ll enjoy.
PS: I will delete this file in a few days to avoid any copyright infringement claim, so get it while you can! (22 tracks listed only in booklet). As promised, here’s more uncompiled tracks from the Bosporus. As the Turkish 60s scene has been quite meticulously covered by various labels (most of all, the Altin Microfon series) it was not an easy task to dig out more, unheard gems, so prepare for a version of “Jerico” in double speed,  and the pauses in Hippy Hippy Shake. As in about 1967/68 Turkish groups (rightly) felt they had to get over the English language-hurdle, they started to sing in Turkish, incorporating elements of (mostly Anatolian) folk music, and Psychedelia, of course.  Exceptionally the last 5 tracks on this set come are from the early 70s, but don’t be afraid, no heavy rock here! It all changed soon later when the Islamic regime took over, and musicians were spied on, accused for undermining the political and cultural system, and even thrown in jail. Still, until today Turkey can boast a rich bag of dance and pop music, and Rock. I hope you’ll dig my selection and don’t be disturbed by the record sleeves that might show the artists on horses, or dressed in traditional costumes of the deserts of Anatolia. Remember we’re in the mythical and mystical land of the Capadoccia, translated “Land of beautiful horses”.  Heya!